German soccer player Michael Ballack's agent, Michael Becker, allegedly told a reporter from Der Spiegel that the German national soccer team that played in the 2010 World Cup is a "bunch of gays". He also told the reporter, Aleksander Osang, that Germany's new, flamboyant style was related to their homosexuality, and that being gay made them too delicate to beat Spain in the semifinal.

Nevertheless, the Germans' style in South Africa was greatly appreciated by both fans and experts. They were praised for the flair and energy that they brought to the field and their third place finish was higher than many people thought the young team would achieve.

Actor James Wolk (seen shirtless, at right), will be starring in a new drama series in the Fall of 2010. He will be seen in the Fox series Lone Star, "a provocative soap set against the backdrop of big Texas oil."

The summary of the show on Fox's web site states, "ROBERT/BOB ALLEN (newcomer James Wolk) is a charismatic and brilliant schemer who has meticulously constructed two lives in two different parts of Texas. He's juggling two identities and two women in two very different worlds – all under one mountain of lies."

Well, Wolk is not really a "newcomer". He appeared with much acclaim in 2008's made-for-tv movie Front of the Class (under the name Jimmy Wolk), in which he played a real-life teacher afflicted with Tourette Syndrome. It's just taken a little while for him to be back on the screen.

I really liked the Front of the Class movie, but I'm not sure I can watch the new drama series. I have trouble watching any hour long drama series. I can't focus my attention that long to keep track of who's who and what's going on.

I will at least watch the first episode of Lone Star though. I want to see if Wolk's performance in Class was a fluke or whether he really is that good, and can be that good playing other roles.

marieperoja77
I scare myself
What is your greatest fear?
Reply 564
This falls into the category of phobia. I have the fear of falling. I don't have a fear of heights. If I am in a secure enclosed location, such as a skyscraper or airplane, being high in the sky doesn't both me. But when there is open air around me, such as on a bridge, I feel the panic and terrible fear that I could be blown or bumped over the side. My heart races and my legs feel like they will buckle. It's a very unpleasant feeling.

My New Wallet
Cell phones are the new wallets…. what do you wish you could pay for with your smartphone?
Reply 77
When I'm at a checkout, I don't want to deal with looking at another little screen, as I and the people behind me are in a hurry to keep the line moving. I want just the hard plastic of my credit card to slide through the card reader and let it be done. However, that's what needs improving. Do away with the clicking on the terminal and writing (sort of) your signature while you are using your card. Slide it in and be done with it. I know that's what she said, when she wasn't in the mood.

speedingslug
No place like home
What are five things you love about where you live and five things that you hate? How does it compare to previous places you've lived?
Reply 681
Love:

1) No crime
2) Easy to get around (except a short period of time during "rush" hour in the morning and late afternoon.
3) Low airfares
4) Four seasons
5) Big city amenities

After his disqualification in the semifinals of the 1000m short track speedskating event at the 2010 Olympic Winter Games, JR Celski unzipped his suit and revealed a large tattoo on his upper left chest. Filipinos and Filipino-Americans were quick to note that the basic design was that of the sun and star combination from the flag of the Philippines. What wasn't so widely noted was that within the sun pattern is the coat of arms of the Republic of Poland.

JR Celski is a Filipino-American (or "Fil-Am") through his mother, Sue. However, he's also a Polish-American (as his last name clearly suggests) through his father, Robert. JR wanted to show both sides of his ethnic heritage by merging together in one tattoo the emblems of both of his ancestral homelands.

Besides the cultural significance of the tattoo, it also made some viewers of the scene on television to widen their eyes, as they saw that the cute little guy with the big smile had also become a hot young man. It looks like if he wants to, Celski can be going places other than in a circle on the ice. His talent and looks and charisma can be starting points for being a star like his teammate Apolo Anton Ohno has been before him. We will see more. 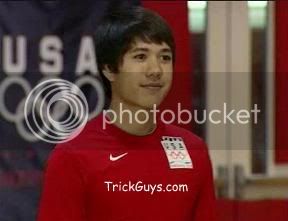 The U.S. Olympic short track speedskater JR Celski appeared on NBC's The Biggest Loser recently as one of several Olympic athletes who participated on the show to help the contestants to exercise and lose weight. JR showed the contestants how to use a slide board, and more importantly inspired them with his own incredible story of injured and fighting his way back from it.

The cast had gone to the Olympic Training Center in Colorado Springs and there they met several athletes, like JR Celski, who helped to push them to do the best they could in their efforts to lose weight.

Before JR was introduced to the contestants, they were taken into a gymnasium where a bunch of slide boards were laid out. The host Alison Sweeney gave them a hint of what was to come, She said, "Becoming an Olympic champion boils down to one thing. On the big day you have to push harder than everyone else." She emphasized the word "push".

Then Alison brought out JR Celski, and asked him to tell his story. He told about how he had injured himself only a few months before at the Olympic Trials. In a crash on the ice he cut his leg to the bone and ended up in a hospital where he was unable to move his leg. He showed all of them his 6" leg scar as the evidence of his tale. "It was the worst thing I've ever experienced, but I bounced back. I guess it's just proven to me, that no matter what situation you're in, you've got to get back up. And that's all you guys have to do, is to be dedicated to what you do and then really, really go for it."

The contestant's challenge for the day was to use a slide board. JR Celski explained to them how to use it. He warned them that it was as slippery as ice, but one of the large people noted that JR made it look simple to use. They also noted that he is an Olympic athlete, so it would be expected for it to be simple for him.

As the contest began, JR took in a deep breath and looked nervous. It wasn't a usual workout group. This one had a lot of participants falling over. He gently gave them some support words: "Come on, push through the pain guys." The contest ended and a gold, silver, and bronze winner were declared. The contestants survived and JR Celski congratulated all of them for their effort. He exhibited his gentle and generous spirit throughout.

I always watch the Olympics Opening Ceremony and the 2010 Olympics Opening Ceremony in Vancouver was no exception. The big difference for me these games was that I was posting comments with like-minded people on the site DataLounge as it occurred. Normally I would just watch and enjoy the spectacle, but this time I took the opportunity to discuss it real-time, expressing my opinion and seeing what other people thought about it. The DL site is a place where people can be really catty about things, so it was a good place to post comments about the Opening Ceremony, since there a lot to be catty about.

For the most part, the entertainment during the show was dreadfully dull. People wandered around the floor or hanged from wires for interminable lengths of time. Even the musical numbers were dull, other than the fiddling, and the dancing to it. By its nature it added a little more fervor, but it certainly was nothing more than what you could see in a run of the mill Broadway show. The most interesting effect was the use of video projectors as mentioned in this post about the solo aerialist Thomas Saulgrain and the 2010 Olympics Opening Ceremony video images.

The athletes' entrance is always interesting, seeing people from the various countries that are represented. On DL it was opportunity to critique the guys. One of the men that was noticed was the Swiss flag-bearer, figure skater Stephane Lambiel (above). It was noted that with his male figure skater flamboyancy, he could do more tricks, on and off the ice, than a Swiss Army knife. He worked that flag.

The entrance of the American team was spoiled by the appearance of their uniforms. The inclusion of the huge Ralph Lauren polo pony trademark was very tacky. However, J.R. Celski, a member of the American short track speed skating team, looked alright in his.

At the time I didn't think I would blogging about it, but I took a lot of my comments from DL and packaged them at the first link (above).

During the week of February 8-12, 2010, I was following the accomplishments of Ryan Conklin as he worked with the Iraq and Afghanistan Veterans of America (IAVA) to speak to members of Congress about the organization's legislative priorities. Ryan was part of "Team Bravo", one of seven small teams that met with various Senators, Congressmen, and their staff. Over the course of 4 days they explained to as many legislators as they could what America's newest veterans critically need in the areas of healthcare and jobs.

The campaign was known as "Storm the Hill 2010", referring to Capitol Hill, although since it occurred during the blizzard of 2010, it could also refer to the many snow hills in the capital. The weather delayed Ryan a little on his journey to Washington but eventually he made it and was able to do his job convincing Congress of the importance of the IAVA's legislation.

To help support the cause, I made a contribution to the campaign through the IAVA's website. The contribution choices were labeled as certain types of goods and the one I chose was "a full day of meals" for a participant. So theoretically I fed Ryan for a day.

Besides the whole thing being a worthy endeavor, it also provided an opportunity for Ryan to walk around at night and see the sights, such as the White House (above).

I decided that I would make my own choice for "2009 Sexiest Man Alive" and that that honor would have to go to Ryan A. Conklin. While my interest in the person is largely an intellectual one, I'm compelled to acknowledge that Ryan has some kind of animal magnetism that many of his fans find irresistible, and that it sometimes makes even me a little weak in the knees when I consider his awesomeness.

The funny thing is that he doesn't have the big physical build of fellow Real World Brooklyn cast members Scott Herman or JD Ordonez, or the male model face of Scott, but he must have something going on that draws people to him like moths to a flame. I previously wrote about this Ryan Conklin kavorka attraction. It is the lure of the (stuffed) animal.
Collapse